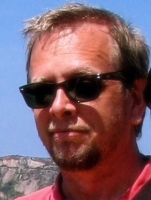 An early consumer of radio, television and films, Jeff began making Super 8 movies in high school and worked his way through Miami University of Ohio until finally escaping with a degree in Mass Communications. His first job was running the community access TV station, KABL-TV in his hometown Springfield, Ohio.
Finding his way to Colorado, he travelled a career path that included toiling as a 2nd unit production assistant for the great Roger Corman on a less than great movie; to producing 400 local TV commercials; until he found professional fulfillment in the non-profit sector filming TV interviews with leaders of the civil rights struggles for the late Dr. Vincent Harding on the "Veterans of Hope" project.

Jeff spent the waning years of the 20th century in Europe as a news videographer & editor; writing and editing Community Media Review (the journal of the Alliance for Communty Media); submitting letters to the New York Times; and becoming a well-known habitué in the cafés of the 14th & 15th arrondisements in Paris.

Jeff returned to the US in 2000 with bride in tow and took the job of executive director at nearby Malden Access TV, helping to initiate new projects, partnerships and outreach programs. During that time he also served as the Chair of the Northeast Region of Alliance for Community Media.

In 2004, Jeff was awarded a Community Fellowship at Harvard's Kennedy School of Government and studied community organizing under Marshall Ganz at the Hauser Institute for Civil Society.

In February of 2006, Jeff was hired as BMC's first executive director. Working hand-in-hand with a forward thinking board of directors, hardworking new staff and enthusiastic volunteers, Jeff aims to build BMC into a vital asset serving all Belmont residents and a model community media center.

Jeff and his wife Sophie spend their "free" time raising and being entertained by their twin sons, Jules and Mathis.