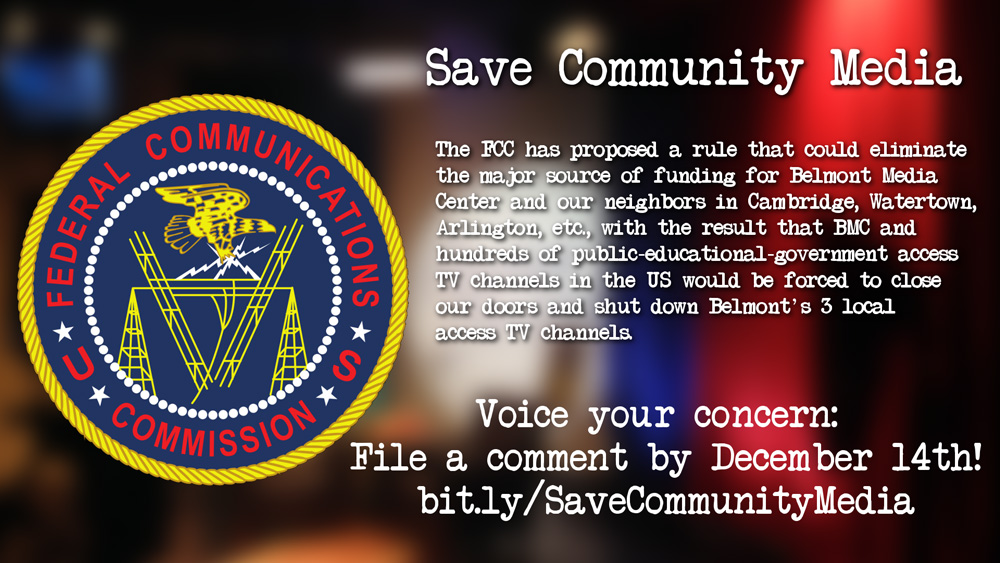 The Federal Communications Commission is considering a rule change to federal law, which if adopted, could eliminate most of the funding for the Belmont Media Center and most local access TV channels in the country!

The Cable Communications Act of 1984 created the framework and funding which today sustains Belmont Media Center and a vital nationwide network of hundreds of community TV channels in cities, towns, counties, and villages from Belfast, Maine to Berkeley California.

Many other Belmontonians have already filed comments to the FCC, now it's your turn.  And here is all you need to do (and it only takes 2 minutes):

Click HERE to open sample "Reply Letter", personalize it where text is RED.

Then save the document as a .pdf file (or word.doc)

Visit the FCC at Bit.ly/SaveCommunityMedia

You should receive an email confirmation.
Download the FCC Fact Sheet HERE

I write to support the Comments of the Cable Act Preservation Alliance (“CAPA”) and to disapprove of the proposals and tentative conclusions set forth in the FCC’s September 25 Further Notice of Proposed Rule Making in Implementation of Section 621(a)(1) of the Cable Communications Policy Act of 1984 as Amended by the Cable Television Consumer Protection and Competition Act of 1992, MB Docket 05- 311.

Belmont Community Media Center enables the residents of Belmont, MA to watch uniquely local programming about their community and local events and issues of interest to them.  And that was the intent of the PEG provisions of the 1984 Cable Act – to enhance local voices, serve local community needs and interests, and strengthen our local democracy.    By defining “franchise fee” in an overly broad fashion to include “in-kind” support, the FCC’s proposals will shift the fair balance between cable franchising authorities and cable operators and will force communities to choose between franchise fees and PEG channels, – something that was never the intent of the Act.

I appreciate your consideration and hope you will protect PEG channels in our community and others by choosing not to adopt many of the proposals in the Further Notice.

Franchise fees as they have been collected and directed since 2005, to support the local channels, operations, & equipment managed by Belmont Media Center, have been well spent and have directly benefitted cable TV subscribers, Belmont residents, our public schools, and our local government. Adoption of the new rulemaking by the FCC will harm our community, and likely result in destroying a critical and robust public telecommunications infrastructure upon which many people depend.

This FCC rule, if adopted, will harm the public, the local school system, and our local government in Belmont, MA, by eliminating the necessary funding formula or reducing franchise fees that are a part of the cable TV systems, operated by Verizon & Comcast.  By contrast, the current interpretation of federal law which has been in force for decades, continues to serve the best interests of the public by sustaining our local electronic communications network and infrastructure.

As a resident of Belmont MA, and a parent of students in the Belmont Public Schools, my family & I derive great benefit directly from the services, local programming, and classes that our local PEG access TV channel provides through our school system, at no cost to taxpayers, local government, or schools.

In the Town of Belmont, our local PEG access TV channels, operated by Belmont Media Center, offer live and repeat broadcasts of Board of Selectmen meetings, but also for the Warrant Committee, School Committee, Planning Board, Zoning Board of Appeals, High School Building Committee, Municipal Light Board, Information Technology Advisory Committee, Town Meeting, other public meetings and Town/School public events & community forums. The reduction of franchise fees that will result in the adoption of this rule will eliminate an irreplaceable tool of local governanace and a vital communications link upon which Belmont residents have come to depend over the last twelve years.

As a taxpayer it is vital and necessary that Belmont Media Center provide live & recorded local TV coverage of our School Committee & Board of Selectmen as residents consider a vote to fund the construction of a new high school. Adoption of this new rule by the FCC will destroy Belmont Media Center’s vital mission to keep taxpayers informed and educated about how our local & state government works and the actions it takes that affect all.