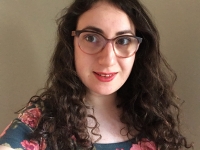 Sharisse Zeroonian officially began working at BMC in 2020 after having started out as a volunteer producer in 2019. Sharisse produces programs, records public meetings, and trains members of the community who wish to learn video editing, and assists with classes.

Prior to working at BMC, she interned at WCA-TV in Watertown as a college student, and later worked as a social media video producer for Care Dimensions, a hospice organization based in Danvers, where one of her responsibilities was to work with the staff to assist with the production and distribution of "Timing is Everything", a cable access television program about hospice care.

Sharisse is also a former afterschool program teacher, and has used her experience in that sector to lead both individual and group workshops for children at BMC.

Sharisse graduated from Boston University in 2018 as a Film/Television major. So far, she has directed three marginally watchable low-budget films. Currently, she is wrapping up post-production of an original television pilot, which was filmed with much better equipment than her other work was.

In addition to being a filmmaker, Sharisse is also an author. Her short fiction has been featured in The Armenian Weekly, Angie's Diary, and NYU's Minetta Review, and she had one poem featured on 90.1 WCAI-FM's "Poetry Sunday" segment. She enjoys listening to music from half a century ago, baking, and doing bad celebrity impressions during audio checks at work. Ask her to do Neil Young - no, wait. Don't. Seriously, don't.